Following the success of several maintenance inputs on SKY PRIME’s Airbus A340 aircraft, which was performed at AMAC in Basel, Switzerland, Sky Prime holds its confidence in AMAC to perform major modifications on the privately-owned A340 in Q2, 2017.

Sky Prime is a leader in the private Aviation market and provides private aviation services such as charter flights and consultancy.

The contract, which includes major modifications such as cabin re-configuration and refurbishment and the re-design of the cabin, was signed during the MEBAA Show, which took place from the 6th to the 8th of December in Dubai, United Arab Emirates. Beside the cabin re-configuration, AMAC will also perform structural modifications on the Airbus A340 aircraft: A KA-Band system that is designed to enable broadband class data connectivity as well as a Live TV system will be installed. The STCs for the KA-Band system and the Live TV are developed by AMAC’s engineering department. Sky Prime’s A340 will also undergo a complete external paint programme at AMAC’s partner facility for painting.

“Access to ultra-high speed, KA Band and high speed Live TV is consistent and reliable, which is crucial for private aviation firms. VIP business aviation passengers demand connectivity and comfort whenever they fly and need their online services to work as seamlessly in the air as they do on the ground.” said Mr. Kadri Muhiddin, Group Executive Chairman & Chief Executive Officer, AMAC Aerospace. “AMAC has worked closely with Sky Prime, supporting its fleet and operations through our aftermarket and technical services, and we are pleased to extend this support to their next-generation aircraft offering full connectivity.” said Mr. Bernd Schramm, Group Chief Operating Officer, AMAC Aerospace. 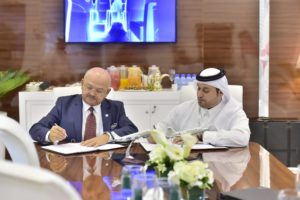