A cabin oxygen system will be replaced from a liquid to a chemical system in conjunction with an annual maintenance check on a BBJ 1 aircraft. Another annual maintenance check which includes A, B1 and B2 checks will be performed by AMAC on a BBJ 2 aircraft in January, 2017. AMAC has also been awarded by an existing customer to carry out C1, C2 and C4 checks along with a landing gear overhaul on a privately-owned BBJ 2 aircraft under consideration of a reduced ground time in order to minimize the operational costs. In addition, a new customer of AMAC Aerospace brought his BBJ 3 aircraft to undergo a C1 check to the facility in Basel, Switzerland.

An Asian client has selected AMAC to perform a C1 check, due Service Bulletins as well as cabin interior work on its A319 aircraft. The aircraft will enter AMAC’s hangar doors by the end of January 2017 and all work will be performed by AMAC’s experienced Airbus team within a reduced ground time. Two further A319 aircraft have already entered the facility for annual inspections. Due to AMAC’s excellent reputation within the private aviation market, AMAC is also proud to announce that a new customer has selected the facility for a C-Check on its A319.

“We are delighted to start 2017 with filled hangars and are thankful that our highest quality standards and tailored maintenance services are appreciated by our esteemed customers as well as recognized by new customers from all regions worldwide.” said Mr. Mauro Grossi, Group Chief Financial Officer, AMAC Aerospace. “Seeing a variety of different business jets entering again or even entering for the first time our facility in Basel, shows that all our efforts that we have performed over the last 10 years are paying off, and we, as a privately-owned company, have achieved a high standing reputation and market position.” added Mr. Bernd Schramm, Group Chief Operating Officer, AMAC Aerospace. 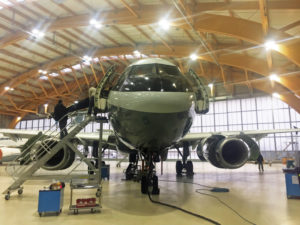