Wide-Body maintenance in ramping up at AMAC Aerospace in Basel, Switzerland.

AMAC’s four hangars are currently operating to full capacity with maintenance work packages on three Airbus A340s and one Boeing B777 and more wide-bodies as a B747-8i to be expected to enter the hangar doors later this year.

In addition, a new maintenance contract which includes a major C-Check package, a landing gear overhaul and interior refurbishment work such as the re-upholstery of the cabin seats and a new cabin carpet on an A330-200 aircraft has been signed by AMAC. The maintenance and refurbishment work on this wide-body will be carried out by AMAC Aerospace as of May this year.

“AMAC has become the MRO of choice when it comes to maintenance on wide-body aircraft. After only 10 years of existence, we have gained significance in the market and are acting now as an established partner in business aviation and are widely considered by private and head-of-state wide-body owners to perform maintenance on their aircraft.” said Mr. Bernd Schramm, Group Chief Operating Officer, AMAC Aerospace. 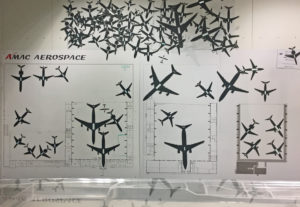